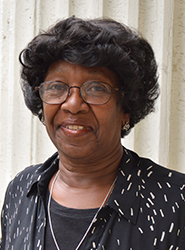 CAROLYN R. HODGES earned a B.A. degree in French at Arcadia University (PA), where an outstanding German teacher and a semester and summer of study in Germany inspired her to go on to obtain an M.A. and a Ph.D. in Germanic Languages and Literatures (with a specialization in 19th- and 20th-century literature) from the University of Chicago. In 1982, she joined the University of Tennessee Department of Germanic and Slavic Languages and shortly thereafter also became a member of the Comparative Literature Committee. In 1999, Professor Hodges was named head of the Department of Modern Foreign Languages and Literatures, formed in 1998 as a result of the merger of two language departments. She left that position in 2004 to become the Associate Dean for Academic Personnel in the College of Arts and Sciences.

Her academic focus has always been driven by a broader interest in interdisciplinary studies and a global approach to literary studies and learning in general. Since joining UT, her teaching and research have emphasized three major areas: multicultural perspectives in modern German literature, comparative literature, and multicultural education. Thus, her writing and teaching have examined the question of German identity in an increasingly diverse German society; comparisons of African-American, Afro-German, and German voices in literature; theories and approaches to multicultural education. Selected examples of her institutional and professional service include: Co-chair of the University of Tennessee Task Force for the Internationalization and Intercultural Awareness Initiative; Secretary-Treasurer and President of the Southern Comparative Literature Association (SCLA); member of the editorial boards for The Comparatist (SCLA) and UT Press; long-standing member of the American Association of Teachers of German Alle lernen Deutsch Committee, which disseminates information about minorities in the teaching and learning of German, in the United States and German-speaking countries.