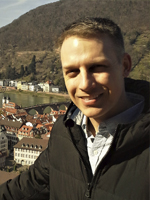 Charles Brown is a candidate for the Ph.D. in Modern Foreign Languages with a first concentration in German and a second concentration in Applied Linguistics. He received his B.A. in German from the University of Maryland in 2004 and M.A. in Strategic Studies from the National Defense University, Washington, DC in 2011.  Charles’ areas of research include the German drama (especially theory of drama and tragedy), literary theory and criticism, and theories of second language acquisition (SLA). Charles’ dissertation will explore the philosophy of the tragic in the German tradition as it relates to German literature of the “long” nineteenth century (1790-1914). Charles is a Graduate Teaching Associate and teaches elementary German.